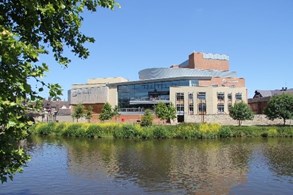 Take a look at the Theatre Severn website for more information.

Theatre Severn and Old Market Hall Cinema and Café Bar in Shrewsbury have announced plans for a first phase of reopening from 4 August. The popular arts venues, owned and operated by Shropshire Council, had both been closed since 16 March 2020 following guidance from the Government.

The Old Market Hall will resume a café bar operation only, with the creation of a new outdoor seating area in The Square. While the Old Market Hall Cinema will remain closed, a film programme restarted at Theatre Severn on Tuesday 4 August, in adherence with social distancing guidelines. The venue will operate at approximately 20% capacity and accommodate an audience of just over 100 per screening. The film programme opens with Sam Mendes’ BAFTA-winning war drama 1917, Disney family film Onward, and Military Wives starring Kristen Scott Thomas and Sharon Horgan.

Alongside the film programme at Theatre Severn, a series of workshops designed for young people have also been created. Devising Theatre is an exciting four-week drama workshop aimed at children 11+ commencing on Thursday afternoons from 6 August. For younger children aged 3-8 years, Princess Storytime will offer a fairytale storytelling experience on Fridays throughout August.

In line with the latest government advice, live indoor performances will not resume until further notice, and ticketholders for scheduled live events are asked to await further updates.

To book tickets and for information on film screenings and workshops, further details can be found at www.theatresevern.co.uk.