Holocaust Memorial Day 2018 - round up of activity in Shropshire

The main focus of our local Holocaust Memorial Day (HMD) activity in Shropshire is to grow a cherry tree orchard of remembrance with schools across Shropshire. We began to grow this orchard in 2015, to mark the 70th anniversary of the liberation of Auschwitz concentration camp from the Nazis.

The trees are the Black Oliver variety, which is an old variety of the West Midlands, chosen in local welcome to all communities and to the birds that we hope will enjoy the fruit in years to come.

As we start to grow more trees across Shropshire, with our local children, our hope is that the children themselves as they grow up will care for and look out for the trees and for each other, and remember the messages of the Holocaust and other genocides.

Members of the two interfaith forums are also involved in ongoing work with schools on an school by school basis, for primary and secondary school age groups, in order to share perspectives on beliefs and increase understanding by pupils of world faiths.

How we do it

We choose a primary school to work with each year, and now have trees in the east, west, north and south of the county. We also make use of the resources that are developed along the way. This includes a primary school resource pack that Mereside developed, and a quote from Anne Frank, which Woodside have put on a plaque to mark their tree, and which we have recommended for others.

We hold interfaith ceremonies to mark the planting of each tree at a primary school, with a special Shropshire prayer that we developed in 2015, the involvement of people from the Jewish, Muslim and Christian faith communities in planning and conducting the ceremonies, and the lighting of candles, together with reflections from the pupils taking part. Our local Shropshire Council councillors take part as community leaders, to share their own messages with young people about the importance of acts of kindness and respect for each other.

The ceremonies involved school pupils from Bishop Hooper CofE School in Ashford Carbonell, Mereside CofE School in Shrewsbury, Trinity CofE in Ford, and Woodside Academy in Oswestry, in a week of activities covering the county. Members of the South Shropshire and Shrewsbury interfaith forums, and local clergy, supported the events with Shropshire Councillors and officers.

The main focus was two ceremonies held on the morning of Friday 26 January 2018. The first of these took place at Mereside CofE Primary School in the east of Shrewsbury, where the first tree was planted in 2015, and where it was measured by the pupils to see how well it was growing.

Ceremonies took place alongside work within the schools focused on the 2018 theme of “The Power of Words”, with pupils from both schools sharing the special letters and postcards that they had written to a Holocaust survivor as part of a national project focused on the theme.

Reverend Ken Chippindale from the Shrewsbury Interfaith Forum read a special prayer and helped to light a candle at Mereside, whilst local vicar Val Tait read the prayer at Trinity. Mark Michaels from the Jewish community and Imam Sohayb Peerbhai from the Muslim community talked with the children at both ceremonies.

Nicola Toms, the West Midlands Regional Support Worker for the national Holocaust Memorial Day Trust, was a welcome guest at both ceremonies.

Joyce Barrow, Shropshire Council’s cabinet member for communities, then took the lead in a ceremony at Woodside Academy on Tuesday 30 January. Mark Michaels travelled up to talk with pupils there, whilst Reverend John Chesworth read the special prayer and helped the four pupils to light a candle by the 2016 tree.

“I am delighted to have been able to be involved in this approach to helping local children to think about the Holocaust and other genocides in a way that is age appropriate. It has been lovely to spend time with the children at Woodside and to see their tree growing so well. I hope that all the children involved at the schools will look out for their trees, and really think about the positive ways in which they can show care for each other and for the environment in everything that they do.”

A display also ran from Wednesday 24 January to Friday 2 February 2018 in the foyer at Shirehall about the HMD trees that have been planted to date across the county. It featured a map to show the HMD trees, including five that were also planted with secondary schools in 2017 through the council’s Incredible Edible project, and the traditional orchards already recorded in Shropshire. The display also featured information about the 2018 theme.

For more information about the 2018 theme, please see resources on the HMD Trust website at www.hmd.org.uk.

Take a look at the 2017 round up of HMD cherry tree planting activity. 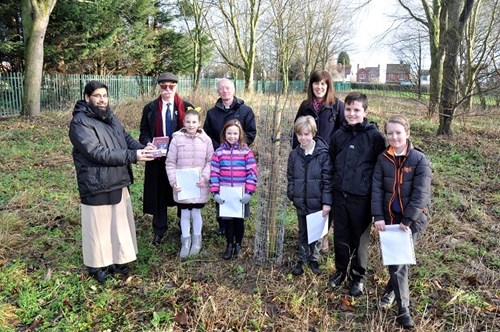 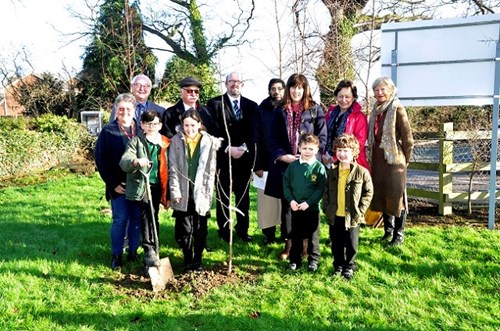 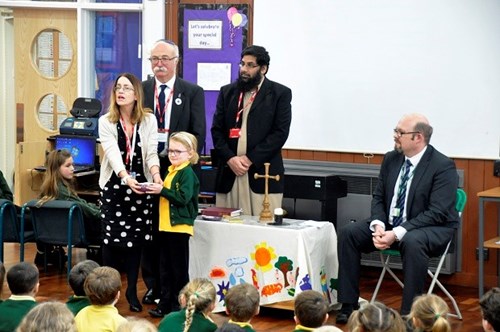