The Highley and Surrounding Area Place Plan covers the area identified within the red outline on the map image on this page. It summarises and prioritises the local infrastructure needs which are required to support the sustainable development of the area, and identifies the wider investment needs to assist delivery of the community’s vision and aspirations. 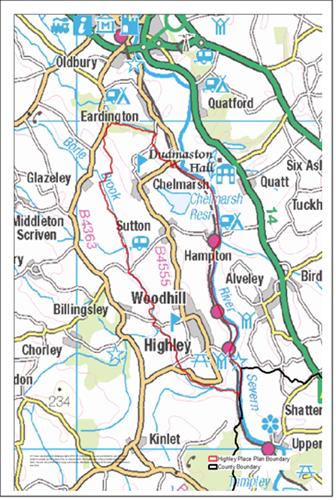 For the Highley and Surrounding Area Place Plan, a review of information has shown that key infrastructure issues are:

There are a number of projects that have been identified and prioritised for the Highley area. You can find the details for projects in the place plan which is attached to this page for viewers to download.

The Core Strategy recognises the role of Shropshire’s market towns and key centres through a specific policy - Policy CS3. This policy outlines how all our towns have distinctive identities, which new development is expected to reinforce, by respecting each town’s distinctive character, and by being sensitive to its landscape setting, historic features, and the towns’ functions.

You can view the full strategy on our planning policy web pages.

The policies for Highley, and then for the wider area, are as follows:

Key points from the Local Plan Review include:

Highley is a large village located in the east of Shropshire, just seven miles south of Bridgnorth town. The village of Highley is the main settlement and is predominantly urban in nature with rural surrounds. The settlement is spread over a mile on the B4555 to the west of the River Severn and the Severn Valley Railway.

Highley contains a mixture of housing in terms of age and type, and the overall population density is higher than the average for Shropshire. The village provides the area with a range of shops and other amenities including a sports and community centre at the Severn Centre.

Highley began as a rural farming community, and is identified as ‘Hughli’ in the Domesday Book entry, named after the lord of the manor. Later the area became significant for stone quarrying, which provided some of the stone for Worcester Cathedral.

Coal mining began in the area in the Middle Ages but the formation of the Highley Mining Company in 1874 saw the expansion of the village. The mine closed in 1969 and is now home to the Severn Valley Country Park.

Chelmarsh is a village within the Highley Place Plan area, being 4 miles south of Bridgnorth on the B4555 road to Highley. The main activities are farming and tourism, with the village having a population of about 500 people. Various activities are based at the hall and social club in the village. The hamlet of Hampton is by the River Severn and close to the Severn Valley Railway, which has a period station in Hampton.

Chelmarsh Reservoir attracts many species of wild birds, and there are two public bird hides near the ‘scrape’. The reservoir is home to an enthusiastic sailing club whose refurbished facilities were opened by Princess Anne in 2004.

For Highley and the surrounding area, the relevant plans include: