Much Wenlock and surrounding area

The Much Wenlock and Surrounding Area Place Plan covers the area identified within the red outline on the map image on this page. It summarises and prioritises the local infrastructure needs which are required to support the sustainable development of the area, and identifies the wider investment needs to assist delivery of the community’s vision and aspirations. 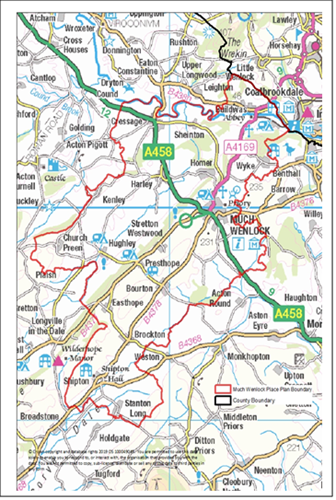 A review of information for this area has shown that key infrastructure issues are:

Several projects have been identified and prioritised for the area. You can find the details for each project in the Much Wenlock Place Plan which is attached to this page to view or download.

The Core Strategy recognises the role of Shropshire’s market towns and key centres through Policy CS3. This policy outlines how all of our towns have distinctive identities, which new development is expected to reinforce, by respecting each town’s distinctive character, and by being sensitive to its landscape setting, historic features, and the towns’ functions. You can read more from Policy CS3 on our planning policy pages.

The policies for Much Wenlock, and then for the wider area, are as follows:

We started reviewing our Local Plan in 2017 and recently consulted on the preferred sites which are needed to meet the county’s development needs during the period to 2036. The new Plan is unlikely to be adopted before 2021.

The review will ensure that the Local Plan continues to be the primary consideration for decisions about development in Shropshire by maintaining robust and defensible policies that conform with national policy and address the changing circumstances within the County and beyond.

More about Much Wenlock

Much Wenlock is a small medieval market town, located in the east of the county mid-point between Shrewsbury and Bridgnorth. Much Wenlock sits alongside Wenlock Edge, a narrow limestone escarpment that runs for 15 miles from Craven Arms to Ironbridge via Much Wenlock.

Much Wenlock developed around an abbey, founded around 685.  This remained until the invasion of Danish Vikings in circa 874.  In the 11th Century a religious house was built on the same site.  This was subsequently replaced by a monastery following the Norman Conquest.  The town and monastery prospered until the dissolution of monasteries in 1539 and the ruins of the site can still be seen today.

There are also the preserved remains of a Cistercian abbey built in 1135, which lies on the south bank of the River Severn in Buildwas and includes a 12th Century church.

In 1850 the local surgeon William Penny Brookes was credited with introducing physical education into British Schools, inspiring the modern Olympic Games.  The mascot for the 2012 London Olympic Games was named Wenlock in honour of the town’s connection to the games.

Today the town retains a number of black and white timber framed buildings with the Guildhall being noted as a fine half-timbered Tudor building. The Guildhall sits in the centre of the town and houses the courtroom and council chamber.

Much Wenlock ward is predominantly rural in nature, sparsely populated and contains a mixture of housing in terms of age and type, alongside a range of shops and other amenities.  The A458 is the key transport route to Bridgnorth and Shrewsbury.

This Place Plan covers the following Town and Parish Councils:

You can view each councillor's profile on the 'Your Councillor' section of our Committee Services web pages.

For Much Wenlock and the surrounding area, the relevant plans include:

The Much Wenlock Neighbourhood Plan now forms part of the Development Plan for Shropshire.