The Shifnal and Surrounding Area Place Plan covers the area identified within the red outline on the map image on this page. It summarises and prioritises the local infrastructure needs which are required to support the sustainable development of the area, and identifies the wider investment needs to assist delivery of the community’s vision and aspirations. 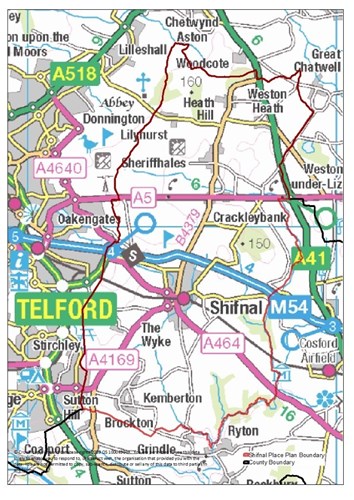 For the Shifnal and Surrounding Area Place Plan, a review of information has shown that key infrastructure issues are:

Several projects have been identified and prioritised for the area. You can find the details for each project in the Whitchurch Place Plan which is attached to this page to view or download.

The Core Strategy recognises the role of Shropshire’s market towns and key centres through Policy CS3. This policy outlines how all of our towns have distinctive identities, which new development is expected to reinforce, by respecting each town’s distinctive character, and by being sensitive to its landscape setting, historic features, and the towns’ functions. You can read more from Policy CS3 on our planning policy pages.

The policies for Shifnal, and then for the wider area, are as follows:

We started reviewing our Local Plan in 2017 and recently consulted on the preferred sites which are needed to meet the county’s development needs during the period to 2036. The new Plan is unlikely to be adopted before 2021.

The review will ensure that the Local Plan continues to be the primary consideration for decisions about development in Shropshire by maintaining robust and defensible policies that conform with national policy and address the changing circumstances within the County and beyond.

Until the late 17th Century, most of the population of Shifnal were involved in agriculture; even craftsmen such as blacksmiths and weavers and innkeepers had their own cattle and grew some corn.

In the 18th Century there was a great expansion in the number and range of crafts in the town with local craftsmen meeting the needs of local people. Shifnal enjoyed considerable prosperity with its transport links as a key staging point for the London to Holyhead road. However, during the 1840s the railway line from London and Birmingham to Holyhead was constructed through Shifnal which brought an abrupt end to the already declining coaching traffic. Shifnal has seen substantial construction in recent years along with significant growth in employment and lies just 3 miles from the M54, the only motorway in Shropshire.

This place plan covers the following Town and Parish Councils:

You can view each councillor's profile on the 'Your Councillor' section of our Committee Services web pages.

For Shifnal and the surrounding area, the relevant plans include:

You can read more about the Shifnal Neighbourhood Plan on their website.

In October 2017, Shropshire Council published its Economic Growth Strategy for 2017-2021.  One of the key actions identified within the Strategy was the development of a local growth strategy for each of our key market towns.

The Shifnal strategy, which takes in the M54 corridor area incorporating Cosford, Tong, and Albrighton, is currently being prepared in conjunction with a range of stakeholders. This includes the town council, surrounding parish councils, and local businesses. The intention is that the strategy is not just confined to the town itself but also takes in the wider hinterland.