This page lists the planned highways maintenance due to be carried out by Shropshire Council and our Shropshire Highways partners this month.

Please note: dates are subject to change due to bad weather and other unforeseen circumstances.

For the latest information see our interactive map.

Our three Multevo Multihog road planer machines tackle potholes and other defects on roads across Shropshire. The Multihog planes off the road surface to enable a squared-off hole to be filled by a following gang.

Our two Roadmasters vehicles tackle potholes on rural roads during spring and summer. In August they'll be operating in zone 4 (north) and zone 8 (central).

Our six ‘find and fix’ gangs will be operating across the county. They identify, or respond to, defects on the county’s 'U' and 'C' roads, and go out and fix them permanently. The gangs generally tackle potholes that are considered dangerous. 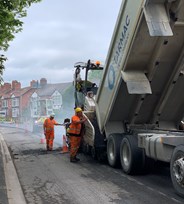 The following roads are set to be resurfaced in August as part of this year’s resurfacing programme. For more information about resurfacing see our 'Resurfacing and surface dressing' page.