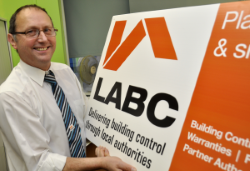 The LABC Superstar Awards celebrate and recognise individuals in local authority building control who go that extra mile to:

Clive has been successfully shortlisted, and will attend a star-studded awards show in Leicester in March 2017.

Clive will follow in the footsteps of our own Melanie Davies, who won the award in 2016. Clive will be up against other local authorities in the West Midlands, as Melanie was.

“Congratulations to Clive on the achievement of being nominated. Our Building Control team provides a really important and valuable service and do a great job, so it’s brilliant for the team and the council that one of our officers has been recognised in this way.”

A winner will be chosen for each of LABC’s regions and Wales by a judging panel including external building industry experts.