We're responsible for a wide range of structures. In this blog, and in the video below, we look at the work we carry out to inspect and maintain Shropshire’s bridges, walls and cattle grids.

What bridges and structures are we responsible for?

We’re responsible for the majority of road and foot bridges in the county, but there are a significant number of bridges that are owned and maintained by other organisations, including Network Rail and the Canals and Rivers Trust (formerly British Waterways Board).

We maintain records of these and if we receive any enquiries we’ll pass them on to the appropriate owner or organisation. 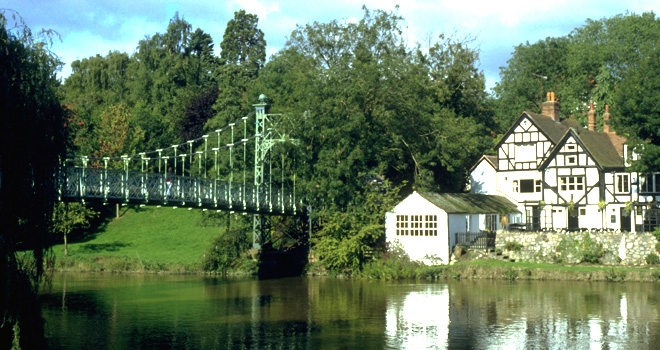 Porthill Bridge, Shrewsbury, which was repaired and refurbished in 2012

How do we decide which bridges need maintenance work?

With more than 1,000 bridges in the Shropshire Council area it takes a lot of time, effort and money to ensure that these bridges are regularly inspected and, where needed, repaired.

This work is essential to ensure that our bridges remain in good order but, more importantly, that they’re safe for people and vehicles to cross.

Our aim is to ensure that our highway bridges and structures are safe by preventing problems before they happen – something which offers the best value for money.

What work do we carry out?

We manage our bridges and structures through a programme of planned inspections and maintenance works. 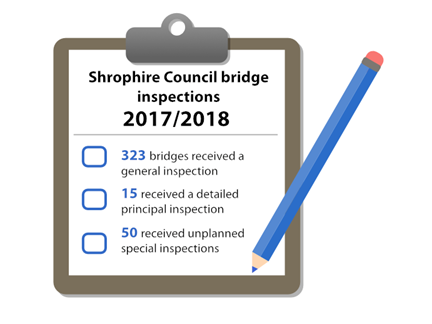 Every three years we carry out a ‘general inspection’ of our bridges.

Every six years we carry out a more detailed close visual inspection (known as a ‘principal inspection’) of our more complex and larger structures. There’s currently a list of around 90 bridges on the principal bridge inspection list.

Due to the configuration of some bridges and/or the obstacles that they cross. e.g. deep water or railway lines, it’s not always possible to fully inspect these bridges at a general inspection.

To enable a thorough inspection of those bridges, we use divers and or specialist access teams. Inspections of structures requiring a specialist confined or diver inspection team are generally carried out at six year intervals, unless floods warrant an earlier inspection. 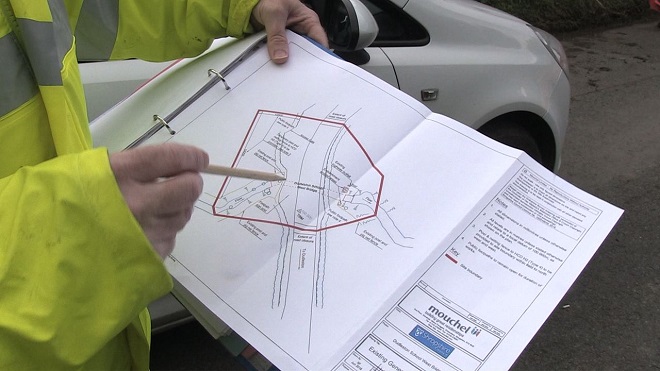 We also carry out approximately 50 unplanned special inspections in a year to establish the condition of a bridge or other structure. These unplanned inspections are carried out following a report of an accident or a concern raised by a member of the public.

Example: when a lorry reversed into Ludford Bridge in Ludlow last year we were called to advise on the integrity of the structure. Unfortunately due to the limited width over the bridge and the extent of the damage caused to the bridge it wasn’t possible to leave the road open to traffic and the bridge had to remain closed until the repair works were completed.

All works are scheduled into a programme of works for delivery in the current or future financial year, based on the findings of the annual bridge inspection programmes.

We prioritise and recommend urgent repairs and maintenance works that are required on a risk-based approach and depending on the available budgets.

During the late 1980s and the 1990s, we undertook a comprehensive programme to assess the load carrying capacity of our bridges with a span of 1.5m or more. This was as a result of proposals to increase the weight of vehicles permitted to use the highway road network from 38 to 40 tonnes. 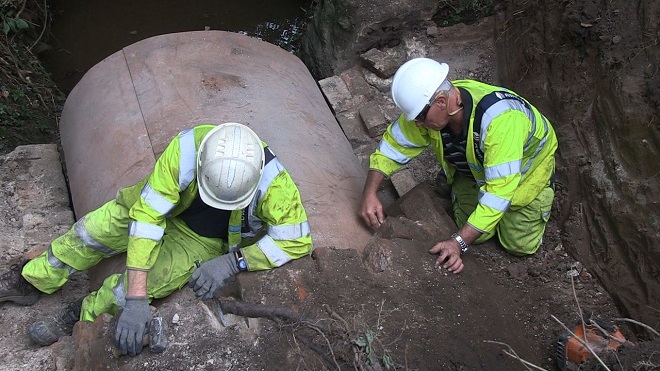 The assessment programme found that a number of bridges were unsuitable and, as a result, a bridge strengthening programme was instigated.

In addition to bridge strengthening schemes, major maintenance work is undertaken to replace or repair structures which fall outside the scope of the bridge assessment programme.

How is the work paid for?

The bridge strengthening programme and other major maintenance work is funded by central government.

Routine and minor maintenance works are funded from the council’s local revenue budget. The costs associated with accident damage are generally recovered from the driver’s insurance when driver details are available.

Budgets and work programmes are subject to change depending on emergency works arising throughout the year. The bridges team is currently working on a three year forward programme of works, which should be in place from April 2018.

What other structures do we maintain and how?

Since 2006 we’ve identified around 1500 retaining walls associated with the highway, although liability and ownership issues have yet to be formally determined.

Due to current funding constraints we can only undertake reactive work to retaining walls as and when the need arises.

We’re responsible for 50 cattle grids and regularly carry out maintenance works, including the cleaning out of debris and the replacement of fencing and gates. This year (2017/18) we have replaced one cattle grid that failed.

Some recent examples of our work

In recent years we have successfully repaired and strengthened a number of bridges across Shropshire. Click on the links for some recent examples.