We use several innovative approaches to ensure that repairs are carried out quickly, successfully and cost-effectively.

These spray material at force into defects without the need to cut out the surrounding area. They're also able to seal cracks in the road to reduce the likelihood of potholes occurring. They're best suited to rural roads with no parking and roads in poorer condition, and can be operated from the cab.

We have three vehicles operating countywide. They usually operate on 'C' and 'U' roads ahead of inspections, but are being extended to help tackle the backlog of issues from winter. 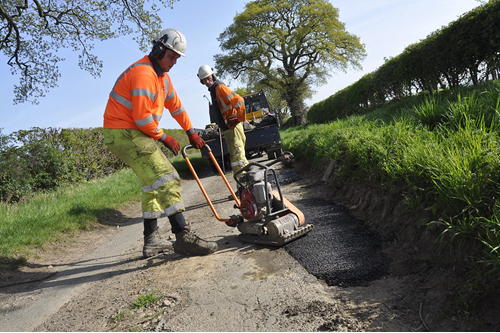 Under our ‘find and fix’ service, six gangs operate across the county. They identify, or respond to, defects on the county’s U and C roads, and go out and fix them permanently.

The gangs generally tackle potholes that are considered dangerous. They'll cut out the hole, clear it of debris, add emulsion to help adhere the tarmac, add the tarmac, flatten it with a wacker plate, then paste around the edges to make it as watertight as possible.

This machine mechanically cuts out damaged road surface and then lays new material. The machine was trialled last year and found to increase productivity significantly compared to 'hand lay' gangs. It's best suited to roads in an otherwise reasonable condition and on busier roads, and significantly reduces disruption time for traffic.

Here's the Multihog in action...

This technique is best suited to roads showing signs of deterioration as it seals the surface of the road from water and extends the life of the road. It's often preceded the year before by patching of small areas that have more substantial damage. Surface dressing significantly reduces the likelihood of potholes occurring over the next ten years.

This technique is best suited to roads where the surface is failed but the sub-surface is still structurally sound. It removes the top layer of the road and replaces it with a new surface. In rural areas where the road isn't made up to the same standards a new layer is often just applied over the old layer to build up its structural strength. Resurfacing will bring the road back up to new.

We have in place a programme to target defects in a planned and efficient way using a fairly new patching system (Texpatch), something we've trialled successfully in Shropshire previously which has been a very effective and efficient way to address footway and carriageway defects.

This programme will start in early June, starting in the north and working south. This strategy will also free-up resources to focus on the rural network.