Fifteen Shropshire primary schools are to get brand new running tracks made from recycled roads, thanks to the government’s ‘sugar tax’ and to staff from Shropshire Council, WSP and Kier – partners in the Shropshire Highways alliance. Construction of the first track began at Criftins Primary School near Ellesmere this week, with the remaining 14 tracks due to be completed by the end of March 2019.

The tracks will be constructed from a total of 1500 tonnes of recycled Shropshire roads. In each case the track will be made of unwanted materials from road maintenance work being carried out close to the school. In addition, a number of improvements to each school’s facilities will also be carried out as the tracks are being constructed, including the creation/maintenance of forest schools, maintenance of school gardens, refreshing playgrounds, and repainting car park markings.

In total, 4000 children are set to benefit from the project, which will enable each child to walk or run a total of 285km in each academic year, at a cost of just £1.30 per pupil per year.

The idea for the tracks came about earlier this year when Shropshire Council received £226,572 from the Healthy Pupils Capital Fund (HPCF), which is funded through the ‘sugar tax’ grant. Of the total grant, £105,000 was set aside to provide school running tracks to help children meet the ‘Daily Mile Challenge’ to walk or run a mile every day. Schools were invited to bid for a share of this funding, and fifteen submitted bids for all-weather running tracks – though the specification varied for each school.

With just £7000 available for each track Shropshire Council asked their engineering consultant WSP to consider how the tracks could be provided within the available budget. WSP decided to offer their services for free through the WSP employee benefit scheme, which allows each employee two paid volunteering days per year. Shropshire Council’s term contractor Kier and their wider supply chain, including Tarmac and L&R, followed WSP’s example by offering their services and materials at cost with no additional multipliers or mark-ups. Savings were also identified by standardising the specification for the 15 tracks, allowing materials to be purchased in bulk at lower costs.

The proposed width of the tracks was increased to allow larger machinery to be used in construction, which results in increased output and reduces the time needed to construct each track. The wider tracks also allow them to be used for cycling, and by wheelchair users.

Further savings were identified by agreeing to tarmac surfacing for all the tracks. This durable and weather-resistant material will also reduce the need for, and cost of, future maintenance.

WSP are also working with Shropshire Council’s highways team and Kier - along with Kier’s supply chain to provide the most significant savings in costs and efficiency by linking the construction of the tracks to the existing Shropshire Highways maintenance contract.

Work at each school will coincide with highways maintenance work nearby, enabling the material to be quickly and easily transported to the school.

“The whole project is an example of how collaborative working, intricate planning and financial astuteness can achieve the greatest level of benefits for the maximum number of children.

Constructing all 15 tracks before the end of January will be quite a challenge but we’re confident that we can do it. Linking to the highway maintenance programme and favourable winter weather conditions will be key factors. We can manage the former, but have our fingers crossed for good weather!”

“The schools who will be receiving the tracks have positively embraced the project and are looking forward to realising and assessing the health and educational learning benefits they will bring for their pupils, both in terms of physical and mental well-being.”

Access to a big supply chain and linking to the maintenance contract will mean a number of improvements to school facilities can also be carried out when the tracks are constructed, including:

It is vital that when maintenance works are taking place on the highway network, access must be granted to the closest school requiring a track so that the risk of double-handling and storing recycled material is mitigated.

The 15 schools that will be getting a new running track are:

The 29 schools whose bids didn’t include a running track will receive a share of the funding to spend on other related activity.

The following figures give an indication of both the complexity and scale of the project that is to be undertaken:

The Daily Mile is a concept first introduced by Elaine Wyllie, the former headteacher of St Ninian’s Primary School, Stirling. As a passionate and fresh-thinking educator, Elaine introduced the initiative in response to observations by a volunteer at her school that the pupils weren’t fit and lacked stamina. This theory was put to the test and pupils were invited to complete a lap of the school field, where upon the results were evident. The pupils became exhausted very quickly and some couldn’t complete a full lap.

It was at that point that Elaine realised the implications of unfit children on their health, wellbeing and ability to concentrate and learn at school. She took action by initially inviting a single class to walk or run a mile every day and in a very short space of time all the classes in the school were taking part.

The Daily Mile was a huge success, improving pupils’ concentration, mood and relationships, as well as their fitness. This led to Elaine being named UK Teacher of the Year at the Pride of Britain awards 2015 and, in 2016, she was awarded an honorary Master of Arts by the University of Stirling.

The Daily Mile is a fully-inclusive, free and simple initiative which improves the physical and mental health of children. It’s a social activity where the children run, jog, or walk at their own pace, for 15 minutes every day and it improves focus in the classroom.

The construction of the school running track at Criftins CE Primary School has been completed and is already being used... 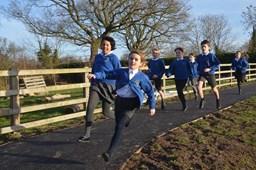 We just have the markings to put down now, which will completed at the same time as refreshing the carriageway markings adjacent to the school and the Cockshutt CE Primary School running track markings. The recycled road planings that were used to construct this track came from the B4499 Hogstow Bank carriageway resurfacing scheme just south of Minsterley (attached is a photo of these being laid at Criftins).

The construction of the school running track at Cockshutt CE Primary School is currently underway. This is a much larger track than Criftins, and the construction is going very well. It's anticipated that the track will be completed week commencing 21 January.

The recycled road planings that were used to construct this track came from the A53 Stanton to Hine Heath carriageway resurfacing scheme, just north of Shawbury. 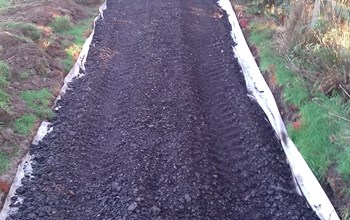 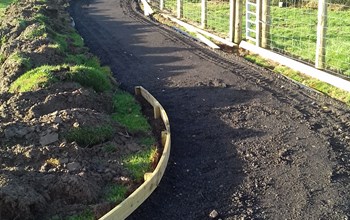 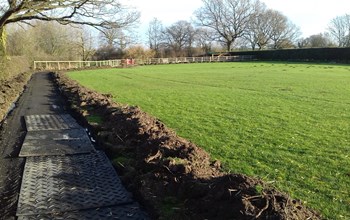 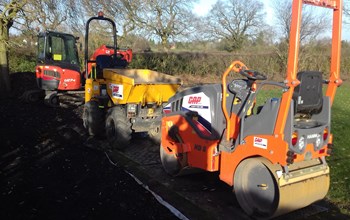