A change to our forms process from 1 July...

This information is correct at the time of publishing but could be subject to change either due to circumstances beyond our control, or should other works come in that make it more efficient and less disruptive to reschedule

These works will include the reprofiling of the junction, including new kerbing, all associated drainage, highway surfacing, road markings and traffic signs.

Work is scheduled to start on Tuesday 1 October 2019 and is anticipated to last for four weeks. The works should be carried out on weekdays only.

During this period access will be maintained to residents and businesses only, but may be restricted at times until the site can be made safe to allow access. Traffic management operatives will be on site to assist if necessary.

The above dates and times have been programmed to accommodate the required works. However these works are weather dependant and may be subject to unforeseen delays, with dates changing accordingly. Should this be the case, we'll try to give as much notice as possible by way of this webpage, local traffic signing and press releases.

The works will be carried out by Kier and supervised by WSP on behalf of Shropshire Council.

We'll make every effort to keep disruption to a minimum, and we apologise in advance for the inconvenience this may cause.

Should you have any questions about the work please email traffic.engineering@shropshire.gov.uk or phone our Highways Customer Services Centre on 0345 678 9006.

The majority of the works at the above location have been completed over a week and a half ahead of schedule and all traffic management has been removed.

There are some minor remedial works to the ditch alongside the A529 to be carried out under temporary traffic lights in due course. We don’t have a date for this as yet.

The following ‘before' and ‘after’ shots taken from the same position on the western approach to the crossroads show where the majority of collisions were happening.

The top picture ‘before’ view shows how the give way lines were hidden from view due to the crest just before the junction and also how the road appeared to continue straight on, as the centre lines appeared to join up.

The below picture ‘after’ view shows how the crest has been removed and that the give way line is now visible with a distinct separation between the centre lines on the approach roads so the illusion that the road continues has been removed. 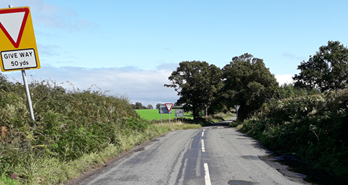 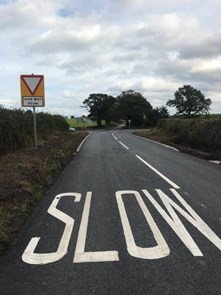